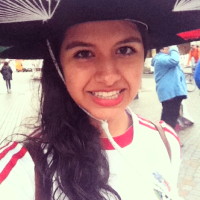 Hello, my name is Kathya, I am sixteen years old and I am from Mexico. I speak spanish in Mexico, and i can speak english too, so we can talk. Mexico's population is 12,000,000 and my city 2,000,000. Mexico usually has a bad reputation, but it's so rich in so many things. Mexico has so much history and interesting ancestors such as the Mayas and Aztecs and Olmecs, among others.

The landscapes are so beautiful such as Oaxaca, Guadalajara, Chiapas, Guanajuato, Mexico City, Monterrey, Chihuahua and so much more. The beaches are famous because of their beauty, such as Cancun, Acapulco, Mazatlan, Cabo San Lucas and others.
Many people ask me about some of the differences between Germany and Mexico, these are some of them. In Mexico we eat everything with tortillas, it's a plain piece of corn flour cooked, I like to think that's like German bread, you eat it for everything all time. We have lots of spicy, on almost every food and in here not. Nutella and butter are essential in here. You eat a lot of potatoes, we like to taste other vegetables. Weather in the north of Mexico is to hot in summer, but i can't say that is all the same in Mexico. Some places are more rainy (the capital) and some are cold (Zacatecas). In here, I love the weather, we usually are about 35–48 °C in summer. My school doesn't have many stairs and it's only for 10th, 11th, 12th (EF, Q1, QII) grades, it's called "preparatoria". We don't have a bell, and there are more places for you to hangout, inside the school. You go everywhere in your car, usually we have two or three for family. I choose to come to Germany because I was interested in your culture and lifestyle, so different from Mexico, and German history and beautiful landscapes and food. This is all possible thanks to an organization called Rotary International. It has a lot of projects around the world and people between 15–18 years old can do International exchange years.